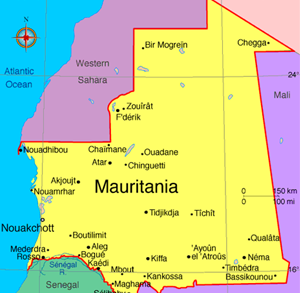 Mauritania is a country in Northwest Africa. It is the eleventh largest sovereign state in Africa and is bordered by the Atlantic Ocean to the west, Western Sahara to the north and northwest, Algeria to the northeast, Mali to the east and southeast, and Senegal to the southwest.The country derives its name from the ancient Berber kingdom of Mauretania, which existed from the 3rd century BCE into the 7th century CE in the far north of modern-day Morocco and Algeria.

Despite being rich in natural resources, Mauritania has a low GDP. A majority of the population still depends on agriculture and livestock for a livelihood, even though most of the nomads and many subsistence farmers were forced into the cities by recurrent droughts in the 1970s and 1980s. Mauritania has extensive deposits of iron ore, which account for almost 50% of total exports. Gold and copper mining companies are opening mines in the interior. The country’s first deepwater port opened near Nouakchott in 1986.Oil was discovered in Mauritania in 2001 in the offshore Chinguetti field. Although potentially significant for the Mauritanian economy, its overall influence is difficult to predict. Mauritania has been described as a “desperately poor desert nation, which straddles the Arab and African worlds and is Africa’s newest, if small-scale, oil producer.” There may be additional oil reserves inland in the Taoudeni basin, although the harsh environment will make extraction expensive.

Mauritania has a strong internet population, with almost 20% of them able to access the internet with ease. But being a landlocked country with most of it in the desert, Satellite Internet is the most practical solution to use in terms of operating in volatile locations.

Vizocom provides the full scope of its services in Mauritania:

Vizocom’s extensive experience in providing VSAT and ICT services to the defense industry and especially governmental agencies, as well as oil and gas, mining, and construction industries has made it an unrivaled partner for their operations around the globe and especially in Mauritania.

Vizocom’s highly reliable VSAT services coupled with our 24/7/365 Customer Support Center with local field support who speak the local language makes Vizocom the right choice when it comes to selecting you ICT and Communication service provider in Mauritania.

Vizocom covers Africa, specifically Mauritania, with several satellites and delivers a flexible range of services on Ku-Band, C-Band, and Ka-Band frequencies that meet and exceed our clients’ expectations. Vizocom’s teleports in the United States and Europe support all platforms to include but not limited to iDirect X1, X3, X5, as well as Comtech, Newtec, and Romantis.