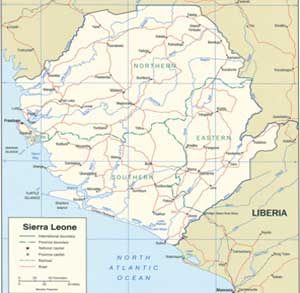 Sierra Leone, officially the Republic of Sierra Leone, is a country in West Africa. It is bordered by Guinea to the northeast, Liberia to the southeast and the Atlantic Ocean to the southwest. It has a tropical climate, with a diverse environment ranging from savanna to rainforests.

Sierra Leone has relied on mining, especially diamonds, for its economic base. It is also among the largest producers of titanium and bauxite, is a major producer of gold, and has one of the world’s largest deposits of rutile. Sierra Leone is home to the third-largest natural harbor in the world. Despite this natural wealth, 53% of its population lived in poverty in 2011.

Internet access in Sierra Leone has been sparse but is on the increase, especially since the introduction of 3G cellular phone services across the country. There are several main internet service providers (ISPs) operating in the country. Freetown has internet cafés and other businesses offering internet access. Problems experienced with access to the Internet include an intermittent electricity supply and a slow connection speed in the country outside Freetown.

Vizocom provides the full scope of its services in Sierra Leone:

Vizocom’s extensive experience in providing VSAT and ICT services to the defense industry and especially governmental agencies, as well as oil and gas, mining, and construction industries has made it an unrivaled partner for their operations around the globe and especially in Sierra Leone.

Vizocom’s highly reliable VSAT services coupled with our 24/7/365 Customer Support Center with local field support who speak the local language makes Vizocom the right choice when it comes to selecting you ICT and Communication service provider in Sierra Leone.

Vizocom covers Africa, specifically Sierra Leone, with several satellites and delivers a flexible range of services on Ku-Band, C-Band, and Ka-Band frequencies that meet and exceed our clients’ expectations. Vizocom’s teleports in the United States and Europe support all platforms to include but not limited to iDirect X1, X3, X5, as well as Comtech, Newtec, and Romantis.