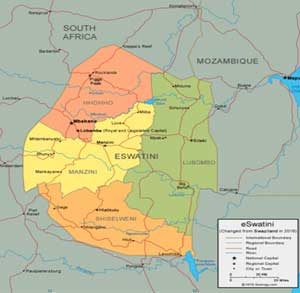 Swaziland, is a landlocked country in Southern Africa. It is bordered by Mozambique to its northeast and South Africa to its north, west and south. The country and the Swazi people take their names from Mswati II, the 19th-century king under whose rule Swazi territory was expanded and unified.

Swaziland’s economy is diverse, with agriculture, forestry and mining accounting for about 13% of GDP, manufacturing (textiles and sugar-related processing) representing 37% of GDP and services – with government services in the lead – constituting 50% of GDP. Title Deed Lands (TDLs), where the bulk of high value crops are grown (sugar, forestry, and citrus) are characterized by high levels of investment and irrigation, and high productivity.

Swaziland is one of the last countries in the world to abolish an almost complete monopoly in all sectors of its telecommunications market. Until 2011 the state-owned operator, Swaziland Posts & Telecommunications Corporation (SPTC), also acted as the industry regulator and had a stake in the country’s sole mobile network, in partnership with South Africa’s MTN Group. In a bid to enter the mobile market independently, SPTC transferred its stake in MTN and the regulatory authority to the government. In return, Swazi MTN received a 3G license and the right to provide its own backbone network and international gateway.

Vizocom provides the full scope of its services in Swaziland:

Vizocom’s extensive experience in providing VSAT and ICT services to the defense industry and especially governmental agencies, as well as oil and gas, mining, and construction industries has made it an unrivaled partner for their operations around the globe and especially in Swaziland.

Vizocom’s highly reliable VSAT services coupled with our 24/7/365 Customer Support Center with local field support who speak the local language makes Vizocom the right choice when it comes to selecting you ICT and Communication service provider in Swaziland.

Vizocom covers Africa, specifically Swaziland, with several satellites and delivers a flexible range of services on Ku-Band, C-Band, and Ka-Band frequencies that meet and exceed our clients’ expectations. Vizocom’s teleports in the United States and Europe support all platforms to include but not limited to iDirect X1, X3, X5, as well as Comtech, Newtec, and Romantis.