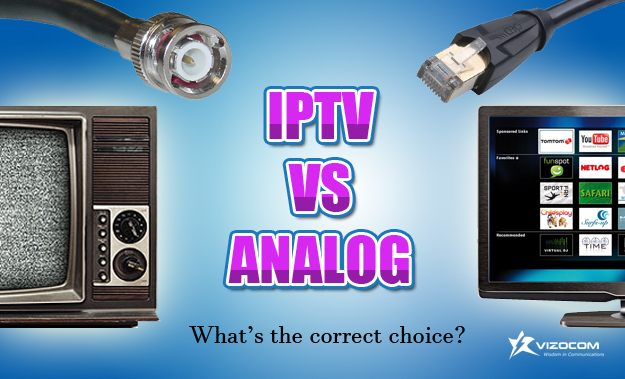 One of the key requirements in every hospitality infrastructure (being it a hotel or a man-camp for a remote oil and gas site) is to provide the guests with a selection of TV entertainment channels in each room.

These solutions usually consist of a “head end” system where satellite and/or terrestrial TV channels are captured and then distributed over the TV network to each TV installed in the rooms.

Up until only a few years ago, the only well-known solution was MATV (Master Antenna TV also known as SMATV – Satellite Master Antenna TV), where the TV channels were “modulated” at the head end over different TV channel frequencies and then distributed over a coaxial distribution network.

Recently however, there is a growing demand for IPTV solutions. As the name suggests, an IPTV system depends on LAN infrastructure (computer network) to fulfil the same function.

Benefits of IPTV over MATV/SMATV

IP-based technologies are for sure the future of everything and the same is true here! There are many benefits of an IPTV system over an MATV/SMATV – some of the most important ones are:

Based on the above benefits of an IPTV system, should you go ahead and replace your existing SMATV tomorrow? Well, there are key challenges that might make this a difficult decision to make:

The other alternative: DVB MATV

In cases where there is a lack of a strong LAN infrastructure, replacing poor quality SMATV systems with IPTV would not seem cost effective. However, there is still another alternative to consider: DVB MATV (Digital Video Broadcast). These systems also work over the same coaxial network used by MATV, but broadcast the channels in DVB (digital) format so they would be a mid-way but cost effective solution to considerably enhance the picture quality of an old MATV system without the need to change the cabling structure. (This is considerable for the renovation of entertainment systems for large hotels where the re-cabling of the whole building would be too much trouble).

With no doubt, analog MATV systems are rapidly becoming outdated and replaced by IPTV systems. It would be up to the current MATV owners to decide the “right time” for the swap!