C-band was the first frequency band to be allocated for use by the satellite communications industry for Fixed and Broadcasting Satellite Services. C-band frequencies have long been recognized to perform better under adverse weather conditions such as rain and snow fade in comparison with other satellite frequency ranges, such as Ku- and Ka-band. 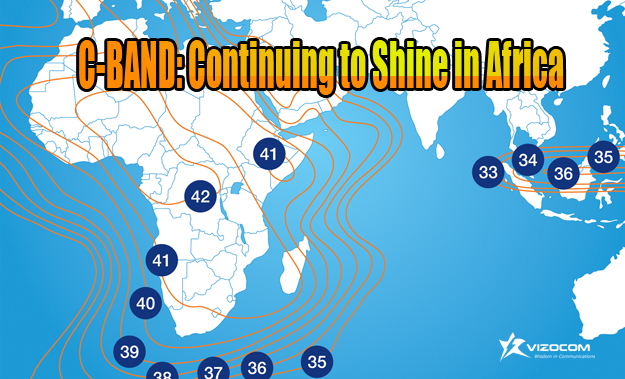 Although new frequencies have emerged over the years and are being used by the satellite industry, C-band still represents a highly significant portion of the total capacity currently supplied by satellites. Today, both C- and Ku-bands are nearly reaching congestion levels.

In order to meet requirements for reliable and uninterrupted communications for maritime, banking, defense and governments, C-band is often preferred over other higher frequency bands which are prone to rain fade. C-band also easily meets the stringent reliability requirements of service levels of over 99 percent of satellite operators.

C-band communications are being represented by wireless manufacturers from developed countries to be of declining importance, but that is clearly not true in Africa where conditions are fundamentally different. Satellite services delivered via the C-band spectrum will spur socio-economic development in Africa.

Nigeria, DRC and Angola have recently recorded increasing investment that has contributed to a boosting of their economies with a key segment being banking. C-band satellite connectivity facilitates the opening of new branches. This in turn favors banking inclusion by giving access to banking services for millions of existing and new customers.

C-band is extensively used for communication networks, with a large impact for the country’s economy, social development and the efficiency of government actions. Users include a large number of public and private organizations, and networks have been identified in both urban and rural areas, with C-band often being used to connect multiple locations spread around the country, as well as to provide direct or backup international connectivity.

The availability of C-band satellite links is of clear, direct and often considerable importance to a variety of economic sectors in all three focus countries. C-band contribution feeds directly underpin the television industries of Africa. C- band transmission is a key component for the distribution of free-to-air (analog and digital) and pay- DTT services. The access of millions of viewers to TV content is consequently dependent on the availability of high-quality C-band transmissions.

Another key segment is the oil and gas and mining industries. Connectivity is key in both exploration and daily production activities, and any impact on C-band networks would have a direct impact on the productivity of the industry, directly impacting the country’s economy and government budgets.

A third key segment is the banking sector. In each country, C-band VSAT networks are widely used to connect bank branches to headquarters, supporting banking services to millions of citizens on a daily basis. The availability of C-band connectivity is an important tool to support the expansion of banking networks.

The fourth key economic sector supported by C-band connectivity corresponds to the telecom sector, including mobile networks and ISPs. Mobile operators, in particular, are dependent on C-band to connect part of their mobile base stations. C-band is and will remain for a number of years the only option to expand the coverage of mobile networks on a national basis.