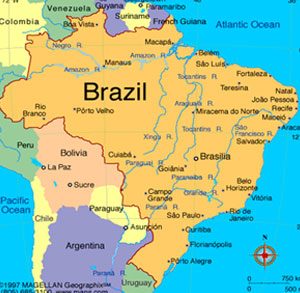 Brazil is considered an advanced emerging economy. It has the eighth largest GDP in the world by both nominal and PPP measures. It is one of the world’s major breadbaskets, being the largest producer of coffee for the last 150 years. It is classified as an upper-middle income economy by the World Bank and a newly industrialized country, with the largest share of global wealth in Latin America. Brazil is a regional power and sometimes considered a great or a middle power in international affairs. On account of its international recognition and influence, the country is subsequently classified as an emerging power and a potential superpower by several analysts.

The Internet has become quite popular in Brazil, with steadily growing numbers of users as well as increased availability. Brazil holds the 6th spot in number of users worldwide. Many technologies are used to bring broadband Internet to consumers, with DSL and cable being the most common (respectively, about 13 million and 9 million connections).Vizocom has enlisted the cooperation of local partners and brought its expertise and capabilities in country to ensure that not only do we meet the expectations of these businesses but exceed them as well.

Vizocom provides the full scope of its services in Brazil:

Vizocom’s extensive experience in providing VSAT and ICT services to the oil and gas industry and especially drilling companies, as well as Defense, Mining, and Construction industries has made it an unrivalled partner for major oil and oil services companies around the globe and especially in theBrazil.

Vizocom covers the South America and specifically Brazil with several satellites and delivers a flexible range of services on Ku-Band, C-Band, and Ka-Band frequencies that meet and exceed our clients’ expectations. Vizocom’s teleports in the United States and Europe support all platforms to include but not limited to iDirect X1, X3, X5, as well as Comtech, Newtec, and Romantis.

Our satellites supporting Brazil include NSS-806