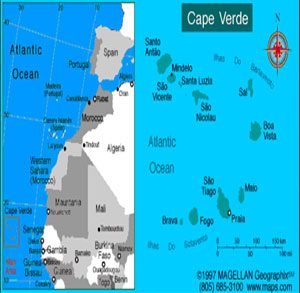 Cape Verde or Cabo Verde, officially the Republic of Cabo Verde, is an island country spanning an archipelago of 10 volcanic islands in the central Atlantic Ocean. It forms part of the Macaronesiaecoregion, along with the Azores, Canary Islands, Madeira, and the Savage Isles. In ancient times these islands were referred to as “the Islands of the Blessed” or the “Fortunate Isles”.

Lacking natural resources, its developing economy is mostly service-oriented, with a growing focus on tourism and foreign investment. Its population of around 540,000 is mostly of mixed European, Moorish, Arab and African heritage, and predominantly Roman Catholic, reflecting the legacy of Portuguese rule.

As of early 2017, about 19% of the Cape Verdean population own an active cellular phone, 70% have access to the Internet.

Vizocom provides the full scope of its services in Cape Verde:

Vizocom’s extensive experience in providing VSAT and ICT services to the defense industry and especially governmental agencies, as well as oil and gas, mining, and construction industries has made it an unrivaled partner for their operations around the globe and especially in Cape Verde.

Vizocom’s highly reliable VSAT services coupled with our 24/7/365 Customer Support Center with local field support who speak the local language makes Vizocom the right choice when it comes to selecting you ICT and Communication service provider in Cape Verde.

Vizocom covers Africa, specifically Cape Verde, with several satellites and delivers a flexible range of services on Ku-Band, C-Band, and Ka-Band frequencies that meet and exceed our clients’ expectations. Vizocom’s teleports in the United States and Europe support all platforms to include but not limited to iDirect X1, X3, X5, as well as Comtech, Newtec, and Romantis.