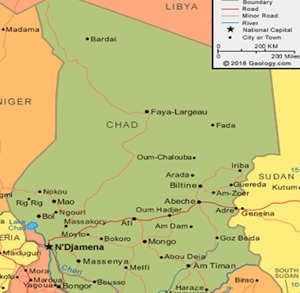 Chad, officially the Republic of Chad, is a landlocked country in north-central Africa. It is bordered by Libya to the north, Sudan to the east, the Central African Republic to the south, Cameroon and Nigeria to the southwest, and Niger to the west. It is the fifth largest country in Africa and the second-largest in Central Africa in terms of area.

In the 1960s, the Mining industry of Chad produced sodium carbonate, or natron. There have also been reports of gold-bearing quartz in the Biltine Prefecture. Over 80% of Chad’s population relies on subsistence farming and livestock raising for its livelihood. The crops grown and the locations of herds are determined by the local climate. In the southernmost 10% of the territory lies the nation’s most fertile cropland, with rich yields of sorghum and millet. In the Sahel only the hardier varieties of millet grow, and these with much lower yields than in the south. On the other hand, the Sahel is ideal pastureland for large herds of commercial cattle and for goats, sheep, donkeys and horses. The Sahara’s scattered oases support only some dates and legumes.In 2000 major direct foreign investment in the oil sector began, boosting the country’s economic prospects.

The telecommunication system is basic and expensive, with fixed telephone services provided by the state telephone company Sotel Tchad. Gateway Communications, a pan-African wholesale connectivity and telecommunications provider also has a presence in Chad. In September 2013, Chad’s Ministry for Posts and Information & Communication Technologies (PNTIC) announced that the country will be seeking a partner for fiber optic technology.

Vizocom provides the full scope of its services in Chad:

Vizocom’s extensive experience in providing VSAT and ICT services to the defense industry and especially governmental agencies, as well as oil and gas, mining, and construction industries has made it an unrivaled partner for their operations around the globe and especially in Chad.

Vizocom’s highly reliable VSAT services coupled with our 24/7/365 Customer Support Center with local field support who speak the local language makes Vizocom the right choice when it comes to selecting you ICT and Communication service provider in Chad.

Vizocom covers Africa, specifically Chad, with several satellites and delivers a flexible range of services on Ku-Band, C-Band, and Ka-Band frequencies that meet and exceed our clients’ expectations. Vizocom’s teleports in the United States and Europe support all platforms to include but not limited to iDirect X1, X3, X5, as well as Comtech, Newtec, and Romantis.