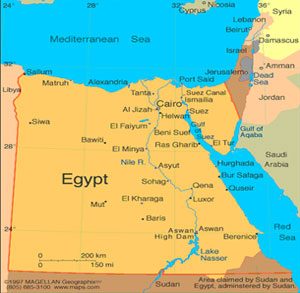 Egypt, officially the Arab Republic of Egypt, is a country spanning the northeast corner of Africa and southwest corner of Asia by a land bridge formed by the Sinai Peninsula. Egypt is a Mediterranean country bordered by the Gaza Strip and Israel to the northeast, the Gulf of Aqaba to the east, the Red Sea to the east and south, Sudan to the south, and Libya to the west. Across the Gulf of Aqaba lies Jordan, across the Red Sea lies Saudi Arabia, and across the Mediterranean lie Greece, Turkey and Cyprus, although none share a land border with Egypt.

Egypt’s economy depends mainly on agriculture, media, petroleum imports, natural gas, and tourism; there are also more than three million Egyptians working abroad, mainly in Libya, Saudi Arabia, the Persian Gulf and Europe. The completion of the Aswan High Dam in 1970 and the resultant Lake Nasser have altered the time-honored place of the Nile River in the agriculture and ecology of Egypt. A rapidly growing population, limited arable land, and dependence on the Nile all continue to overtax resources and stress the economy.

In September 1999 a national project for a technological renaissance was announced reflecting the commitment of the Egyptian government to developing the country’s IT-sector. The Internet in Egypt is an important part of daily life, as a majority of the population has access to Internet, via smartphones, Internet cafes, or at home. Broadband Internet access via ADSL is widespread.

Vizocom provides the full scope of its services in Egypt:

Vizocom’s extensive experience in providing VSAT and ICT services to the defense industry and especially governmental agencies, as well as oil and gas, mining, and construction industries has made it an unrivaled partner for their operations around the globe and especially in Egypt.

Vizocom’s highly reliable VSAT services coupled with our 24/7/365 Customer Support Center with local field support who speak the local language makes Vizocom the right choice when it comes to selecting you ICT and Communication service provider in Egypt.

Vizocom covers Africa, specifically Egypt, with several satellites and delivers a flexible range of services on Ku-Band, C-Band, and Ka-Band frequencies that meet and exceed our clients’ expectations. Vizocom’s teleports in the United States and Europe support all platforms to include but not limited to iDirect X1, X3, X5, as well as Comtech, Newtec, and Romantis.