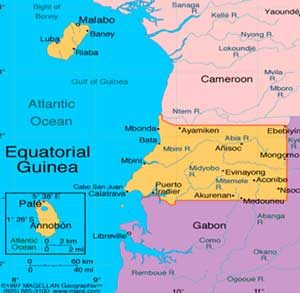 Equatorial Guinea, officially the Republic of Equatorial Guinea, is a country located in Central Africa, with an area of 28,000 square kilometers (11,000 sq mi). Formerly the colony of Spanish Guinea, its post-independence name evokes its location near both the Equator and the Gulf of Guinea. Equatorial Guinea is the only sovereign African state in which Spanish is an official language.

Since the mid-1990s, Equatorial Guinea has become one of sub-Saharan Africa’s largest oil producers. It is the richest country per capita in Africa, and its gross domestic product (GDP) adjusted for purchasing power parity (PPP) per capita ranks 43rd in the world.

Landline telephone penetration is low, with only two lines available for every 100 persons. There is one GSM mobile telephone operator, with coverage of Malabo, Bata, and several mainland cities. As of 2009, approximately 40% of the population subscribed to mobile telephone services. There is only one telephone provider in the country. There were more than 42,000 internet users by December 2011.

Vizocom provides the full scope of its services in Equatorial Guinea:

Vizocom’s extensive experience in providing VSAT and ICT services to the defense industry and especially governmental agencies, as well as oil and gas, mining, and construction industries has made it an unrivaled partner for their operations around the globe and especially in Equatorial Guinea.

Vizocom’s highly reliable VSAT services coupled with our 24/7/365 Customer Support Center with local field support who speak the local language makes Vizocom the right choice when it comes to selecting you ICT and Communication service provider in Equatorial Guinea.

Vizocom covers Africa, specifically Equatorial Guinea, with several satellites and delivers a flexible range of services on Ku-Band, C-Band, and Ka-Band frequencies that meet and exceed our clients’ expectations. Vizocom’s teleports in the United States and Europe support all platforms to include but not limited to iDirect X1, X3, X5, as well as Comtech, Newtec, and Romantis.