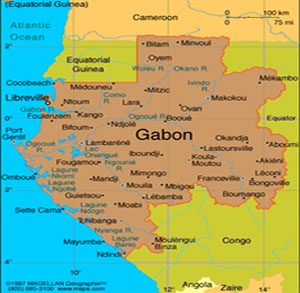 Gabon, officially the Gabonese Republic, is a country on the west coast of Central Africa. Located on the equator, Gabon is bordered by Equatorial Guinea to the northwest, Cameroon to the north, the Republic of the Congo on the east and south, and the Gulf of Guinea to the west.

Abundant petroleum and foreign private investment have helped make Gabon one of the most prosperous countries in Sub-Saharan Africa, with the 4th highest HDI and the fourth highest GDP per capita (PPP) (after Mauritius, Equatorial Guinea and Seychelles) in the region. GDP grew by more than 6% per year from 2010 to 2012.

In 2013, Government signs with the World Bank to develop the Central African Backbone. Over 1200 km of fiber optic is deployed around the country. In 2017, over 20 cities and villages are serviced by this new network operated by Axione (Bouygues French Company). 70% of the Gabonese population can access mobile broadband services. In 2003, there were 22.4 personal computers for every 1,000 people and 26 of every 1,000 people had access to the Internet. There were six secure Internet servers in the country in 2004. By 2011, approximately 109,000 people were determined to be Internet users.

Vizocom provides the full scope of its services in Gabon:

Vizocom’s extensive experience in providing VSAT and ICT services to the defense industry and especially governmental agencies, as well as oil and gas, mining, and construction industries has made it an unrivaled partner for their operations around the globe and especially in Gabon.

Vizocom’s highly reliable VSAT services coupled with our 24/7/365 Customer Support Center with local field support who speak the local language makes Vizocom the right choice when it comes to selecting you ICT and Communication service provider in Gabon.

Vizocom covers Africa, specifically Gabon, with several satellites and delivers a flexible range of services on Ku-Band, C-Band, and Ka-Band frequencies that meet and exceed our clients’ expectations. Vizocom’s teleports in the United States and Europe support all platforms to include but not limited to iDirect X1, X3, X5, as well as Comtech, Newtec, and Romantis.