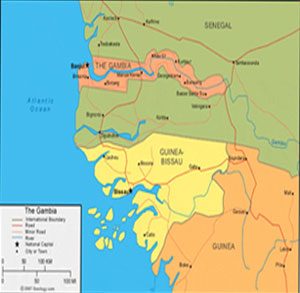 The Gambia, officially the Republic of the Gambia, is a country in West Africa that is almost entirely surrounded by Senegal with the exception of its western coastline along the Atlantic Ocean. It is the smallest country within mainland Africa.

The Gambia’s economy is dominated by farming, fishing and, especially, tourism. In 2015, 48.6% of the population lived in poverty. In rural areas poverty is even more widespread with a higher proportion of the population being poor (almost 70%). The Gambia has a liberal, market-based economy characterized by traditional subsistence agriculture, a historic reliance on groundnuts (peanuts) for export earnings, a re-export trade built up around its ocean port, low import duties, minimal administrative procedures, a fluctuating exchange rate with no exchange controls, and a significant tourism industry.

Vizocom provides the full scope of its services in Gambia:

Vizocom’s extensive experience in providing VSAT and ICT services to the defense industry and especially governmental agencies, as well as oil and gas, mining, and construction industries has made it an unrivaled partner for their operations around the globe and especially in Gambia.

Vizocom’s highly reliable VSAT services coupled with our 24/7/365 Customer Support Center with local field support who speak the local language makes Vizocom the right choice when it comes to selecting you ICT and Communication service provider in Gambia.

Vizocom covers Africa, specifically Gambia, with several satellites and delivers a flexible range of services on Ku-Band, C-Band, and Ka-Band frequencies that meet and exceed our clients’ expectations. Vizocom’s teleports in the United States and Europe support all platforms to include but not limited to iDirect X1, X3, X5, as well as Comtech, Newtec, and Romantis.