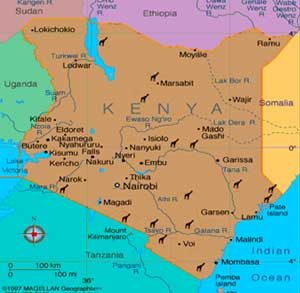 Kenya, officially the Republic of Kenya, is a country in Africa with its capital and largest city in Nairobi. Kenya’s territory lies on the equator and overlies the East African Rift, covering a diverse and expansive terrain that extends roughly from Lake Victoria to Lake Turkana (formerly called Lake Rudolf) and further south-east to the Indian Ocean. It is bordered by Tanzania to the south and south-west, Uganda to the west, South Sudan to the north-west, Ethiopia to the north and Somalia to the north-east. Kenya covers 581,309 km2 (224,445 sq mi) has a population of approximately 48 million.

Kenya’s economy is the largest in eastern and central Africa, with Nairobi serving as a major regional commercial hub. Agriculture is the largest sector; tea and coffee are traditional cash crops, while fresh flowers are a fast-growing export. The service industry is also a major economic driver, particularly tourism.

Internet in Kenya is prevalent. As of 2012, there are 13.8 million users in the country, ranking 35th in the world; 32.1% of the population. All mainstream media houses have websites that they use to convey news and other information. The rise of online magazines, blogs and websites for Kenyan news is also increasing.

Vizocom provides the full scope of its services in Kenya:

Vizocom’s extensive experience in providing VSAT and ICT services to the defense industry and especially governmental agencies, as well as oil and gas,mining, and construction industries has made it an unrivalled partner for their operations around the globe and especially in Kenya.

Vizocom’s highly reliable VSAT services coupled with our 24/7/365 Customer Support Center with local field support who speak the local language makes Vizocom the right choice when it comes to selecting you ICT and Communication service provider in Kenya.

Vizocom covers Africa, specifically Kenya, with several satellites and delivers a flexible range of services on Ku-Band, C-Band, and Ka-Band frequencies that meet and exceed our clients’ expectations. Vizocom’s teleports in the United States and Europe support all platforms to include but not limited to iDirect X1, X3, X5, as well as Comtech, Newtec, and Romantis.