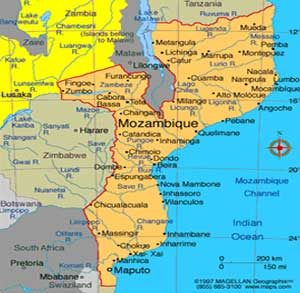 Mozambique, officially the Republic of Mozambique, is a country located in Southeast Africa bordered by the Indian Ocean to the east, Tanzania to the north, Malawi and Zambia to the northwest, Zimbabwe to the west, and Eswatini (Swaziland) and South Africa to the southwest. The sovereign state is separated from the Comoros, Mayotte and Madagascar by the Mozambique Channel to the east.

Mozambique is endowed with rich and extensive natural resources. The country’s economy is based largely on agriculture, but industry is growing, mainly food and beverages, chemical manufacturing and aluminum and petroleum production. The tourism sector is also expanding. South Africa is Mozambique’s main trading partner and source of foreign direct investment, while Belgium, Brazil, Portugal and Spain are also among the country’s most important economic partners. Since 2001, Mozambique’s annual average GDP growth has been among the worlds’ highest.

With only 4.8% of the population having access to the internet, Mozambique’s internet usage is among the lowest in Africa. According to a report released in 2007, the capital Maputo had the highest internet usage rate, standing at 37.7%.

Vizocom provides the full scope of its services in Mozambique:

Vizocom’s extensive experience in providing VSAT and ICT services to the defense industry and especially governmental agencies, as well as oil and gas, mining, and construction industries has made it an unrivaled partner for their operations around the globe and especially in Mozambique.

Vizocom’s highly reliable VSAT services coupled with our 24/7/365 Customer Support Center with local field support who speak the local language makes Vizocom the right choice when it comes to selecting you ICT and Communication service provider in Mozambique.

Vizocom covers Africa, specifically Mozambique, with several satellites and delivers a flexible range of services on Ku-Band, C-Band, and Ka-Band frequencies that meet and exceed our clients’ expectations. Vizocom’s teleports in the United States and Europe support all platforms to include but not limited to iDirect X1, X3, X5, as well as Comtech, Newtec, and Romantis.