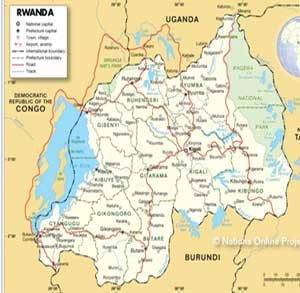 Rwanda, officially the Republic of Rwanda, is a country in Central and East Africa and one of the smallest countries on the African mainland. Located a few degrees south of the Equator, Rwanda is bordered by Uganda, Tanzania, Burundi and the Democratic Republic of the Congo.

Rwanda’s economy suffered heavily in wake of the 1994 genocide, but has since strengthened. The economy is based mostly on subsistence agriculture. Coffee and tea are the major cash crops for export. Tourism is a fast-growing sector and is now the country’s leading foreign exchange earner.Rwanda is a developing country with about 70% of the population engaged in agriculture. However, Rwanda has undergone rapid industrialization thanks to successful government policy. Since the early-2000s, Rwanda has witnessed an economic boom improving the living standards of many Rwandans.

The telecommunications sector was liberalized in 2001, and the number of companies providing telephone and Internet services increased from one, the state-run Rwandatel, to 10 in 2012. These providers are all privately owned, with the exception of Rwandatel. Internet penetration is low but rising rapidly; in 2015 there were 12.8 internet users per 100 people, up from 2.1 in 2007.

Vizocom provides the full scope of its services in Rwanda:

Vizocom’s extensive experience in providing VSAT and ICT services to the defense industry and especially governmental agencies, as well as oil and gas, mining, and construction industries has made it an unrivaled partner for their operations around the globe and especially in Rwanda.

Vizocom’s highly reliable VSAT services coupled with our 24/7/365 Customer Support Center with local field support who speak the local language makes Vizocom the right choice when it comes to selecting you ICT and Communication service provider in Rwanda.

Vizocom covers Africa, specifically Rwanda, with several satellites and delivers a flexible range of services on Ku-Band, C-Band, and Ka-Band frequencies that meet and exceed our clients’ expectations. Vizocom’s teleports in the United States and Europe support all platforms to include but not limited to iDirect X1, X3, X5, as well as Comtech, Newtec, and Romantis.