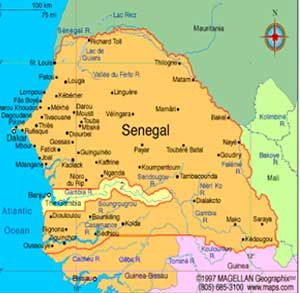 Senegal, officially the Republic of Senegal, is a country in West Africa. Senegal is bordered by Mauritania in the north, Mali to the east, Guinea to the southeast, and Guinea-Bissau to the southwest. Senegal also borders The Gambia, a country occupying a narrow sliver of land along the banks of the Gambia River, which separates Senegal’s southern region of Casamance from the rest of the country.

After its economy contracted in 1993, Senegal instituted a major economic reform program with the support of international donors. This reform began with a 50 percent devaluation of the country’s currency (the CFA franc). Government price controls and subsidies were also dismantled. As a result, Senegal’s inflation went down, investment went up, and the gross domestic product rose yearly between 1995 and 2001. The main industries include food processing, mining, cement, artificial fertilizer, chemicals, textiles, refining imported petroleum, and tourism. Exports include fish, chemicals, cotton, fabrics, groundnuts, and calcium phosphate.

Senegal has an excellent telecommunications infrastructure, which is now digital. Cable, telex, fax, and Internet services are available. There has been a boom of Internet-related activities and services and in cell phone usage. The last several years have witnessed spectacular growth of mobile telephone use from 1.5 million subscribers in 2005 to 13.3 million in 2012. A number of cyber cafés are located in the capital, Dakar, and other cities.

Vizocom provides the full scope of its services in Senegal:

Vizocom’s extensive experience in providing VSAT and ICT services to the defense industry and especially governmental agencies, as well as oil and gas, mining, and construction industries has made it an unrivaled partner for their operations around the globe and especially in Senegal.

Vizocom’s highly reliable VSAT services coupled with our 24/7/365 Customer Support Center with local field support who speak the local language makes Vizocom the right choice when it comes to selecting you ICT and Communication service provider in Senegal.

Vizocom covers Africa, specifically Senegal, with several satellites and delivers a flexible range of services on Ku-Band, C-Band, and Ka-Band frequencies that meet and exceed our clients’ expectations. Vizocom’s teleports in the United States and Europe support all platforms to include but not limited to iDirect X1, X3, X5, as well as Comtech, Newtec, and Romantis.