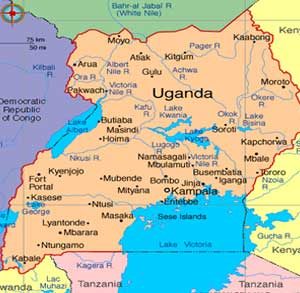 Uganda is a landlocked country in East-Central Africa. It is bordered to the east by Kenya, to the north by South Sudan, to the west by the Democratic Republic of the Congo, to the south-west by Rwanda, and to the south by Tanzania. The southern part of the country includes a substantial portion of Lake Victoria, shared with Kenya and Tanzania.

Endowed with significant natural resources, including ample fertile land, regular rainfall, and mineral deposits, it is thought that Uganda could feed all of Africa if it were commercially farmed. The economy of Uganda has great potential, and it appeared poised for rapid economic growth and development. Chronic political instability and erratic economic management since self-rule has produced a record of persistent economic decline that has left Uganda among the world’s poorest and least-developed countries.

Vizocom provides the full scope of its services in Uganda:

Vizocom’s extensive experience in providing VSAT and ICT services to the defense industry and especially governmental agencies, as well as oil and gas, mining, and construction industries has made it an unrivaled partner for their operations around the globe and especially in Uganda.

Vizocom’s highly reliable VSAT services coupled with our 24/7/365 Customer Support Center with local field support who speak the local language makes Vizocom the right choice when it comes to selecting you ICT and Communication service provider in Uganda.

Vizocom covers Africa, specifically Uganda, with several satellites and delivers a flexible range of services on Ku-Band, C-Band, and Ka-Band frequencies that meet and exceed our clients’ expectations. Vizocom’s teleports in the United States and Europe support all platforms to include but not limited to iDirect X1, X3, X5, as well as Comtech, Newtec, and Romantis.