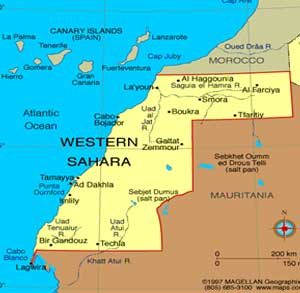 Western Sahara is a disputed territory in the Maghreb region of North Africa, partially controlled by the self-proclaimed Sahrawi Arab Democratic Republic and partially Moroccan-occupied, bordered by Morocco proper to the north, Algeria to the northeast, Mauritania to the east and south, and the Atlantic Ocean to the west.

Western Sahara’s economy is based almost entirely on fishing and phosphate mining which employs two-thirds of its workforce. Some lesser extent agriculture and tourism also contribute to the territory’s economy. Most food for the urban population comes from Morocco. All trade and other economic activities are controlled by the Moroccan government (as its de facto southern province).

Telecommunications in Western Sahara include radio, television, fixed and mobile telephones, and the Internet. They are solely dependent on Morocco’s internet.

Vizocom provides the full scope of its services in Western Sahara:

Vizocom’s extensive experience in providing VSAT and ICT services to the defense industry and especially governmental agencies, as well as oil and gas, mining, and construction industries has made it an unrivaled partner for their operations around the globe and especially in Western Sahara.

Vizocom’s highly reliable VSAT services coupled with our 24/7/365 Customer Support Center with local field support who speak the local language makes Vizocom the right choice when it comes to selecting you ICT and Communication service provider in Western Sahara.

Vizocom covers Africa, specifically Western Sahara, with several satellites and delivers a flexible range of services on Ku-Band, C-Band, and Ka-Band frequencies that meet and exceed our clients’ expectations. Vizocom’s teleports in the United States and Europe support all platforms to include but not limited to iDirect X1, X3, X5, as well as Comtech, Newtec, and Romantis.