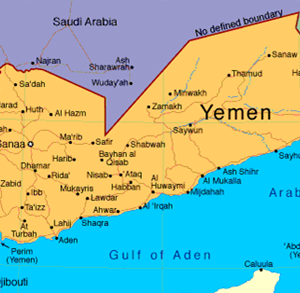 Yemen is a country at the southern end of the Arabian Peninsula in Western Asia. Yemen is the second-largest Arab sovereign state in the peninsula. It is bordered by Saudi Arabia to the north, the Red Sea to the west, the Gulf of Aden and Guardafui Channel to the south, and the Arabian Sea and Oman to the east. Yemen’s territory includes more than 200 islands.

Agriculture is the mainstay of Yemen’s economy, generating more than 20 percent of gross domestic product (GDP) since 1990 and employing more than half of the working population.Yemen is a small oil producer. Unlike many regional oil producers, Yemen relies heavily on foreign oil companies that have production-sharing agreements with the government.

Yemen had 2.349 million Internet users in 2011, up from 295,232 in 2008. These low numbers are attributed to the high cost of computer equipment and connections in combination with the population’s low level of income, as well as to the restricted bandwidth available on Yemen’s outdated telephone network.

Vizocom provides the full scope of its services in Yemen:

Vizocom’s extensive experience in providing VSAT and ICT services to the oil and gas industry and especially drilling companies, as well as defense, Mining, and Construction industries has made it an unrivaled partner for major oil and oil services companies around the globe and especially in Yemen.

Vizocom covers the Middle East and specifically Yemen with several satellites and delivers a flexible range of services on Ku-Band, C-Band, and Ka-Band frequencies that meet and exceed our clients’ expectations. Vizocom’s teleports in the United States and Europe support all platforms to include but not limited to iDirect X1, X3, X5, as well as Comtech, Newtec, and Romantis.