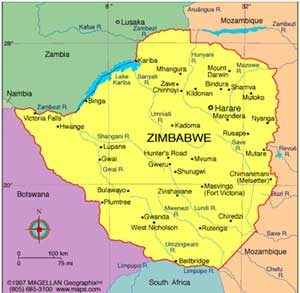 Zimbabwe is a landlocked country located in southern Africa, between the Zambezi and Limpopo Rivers, bordered by South Africa, Botswana, Zambia and Mozambique. The capital and largest city is Harare and a country of roughly 16 million people.

Minerals, gold, and agriculture are the main foreign exports of Zimbabwe. Tourism also plays a key role in its economy. The mining sector remains very lucrative, with some of the world’s largest platinum reserves being mined by Anglo American plc and Impala Platinum. The Marange diamond fields, discovered in 2006, are considered the biggest diamond find in over a century.

The Internet in Zimbabwe has seen rapid expansion in recent years. In 2009, the Mugabe-Tsvangirai Government of National Unity established a Ministry of Information and Communications Technology to focus on ICT growth and development.Approximately 40 percent (5.2 million) of Zimbabwe’s population were internet users as of January 2014. This contrasts with 15.7 percent in 2011 and 0.4 percent in the year 2000. Most of the users (5.16 million) access internet via mobile devices.

Vizocom provides the full scope of its services in Zimbabwe:

Vizocom’s extensive experience in providing VSAT and ICT services to the defense industry and especially governmental agencies, as well as oil and gas, mining, and construction industries has made it an unrivaled partner for their operations around the globe and especially in Zimbabwe.

Vizocom’s highly reliable VSAT services coupled with our 24/7/365 Customer Support Center with local field support who speak the local language makes Vizocom the right choice when it comes to selecting you ICT and Communication service provider in Zimbabwe.

Vizocom covers Africa, specifically Zimbabwe, with several satellites and delivers a flexible range of services on Ku-Band, C-Band, and Ka-Band frequencies that meet and exceed our clients’ expectations. Vizocom’s teleports in the United States and Europe support all platforms to include but not limited to iDirect X1, X3, X5, as well as Comtech, Newtec, and Romantis.